With the advent of streamlined Raspberry Pi + NMEA 2000 hardware, building a dedicated Signal K server has never been easier. Signal K is very powerful, but most people I talk to want to go a step further and have Grafana graphs and dashboards, along with other plugins and features. This article goes through my recommended steps to set up the base operating system and common programs for those items.

This is a companion discussion topic for the original entry at https://seabits.com/set-up-signal-k-and-grafana-on-raspberry-pi-with-pican-m-nmea-2000-board/
Tyler_DeWitt March 12, 2022, 3:21am #2

Thanks for the great article! I’ve got everything hooked up, but I notice on restart that can0 isn’t coming up properly. I used journalctl -u socketcan-interface.service -b to take a look, and this is the error I’m getting

Any idea what is going on there?

It’s been a lot of fun playing around with the data. Thanks for the step by step instructions of getting it set up!

Hmmm seems like the interface isn’t there at boot up, or maybe at the particular time it is being started/searched for. Can you manually start things afterwards, or does it just not work at all after boot up?

I can manually start up the interface with sudo /sbin/ip link set can0 up type can bitrate 250000 and then the data starts flowing in. I tried manually running the commands contained in the .services file, but got errors like “device or port already in use”.

to /etc/network/interfaces, and that seems to work nicely.

I’ve just gotten home, so I’ll remove the /etc/network/interfaces changes and go back to the services approach and see if I can reproduce the error.

It’s been a long time since I’ve mucked around with linux. What info would be useful for you to have?

Instead of copy and pasting, I tried manually typing the file contents (in case a weird white space character was appearing). I also only included the first line -

That worked on first reboot, but has failed on every subsequent reboot.

the socket starts up just fine.

I think you are right that there is an ordering issue. I’m just not sure where to start looking.

Love the article. Just ordered a PICAN-M board!

I also suggest you have a look at Signal K’s KIP plugin. Probably the most useable dashboard and it works with most if not all browsers.

I think you are right that there is an ordering issue. I’m just not sure where to start looking.

Very odd. Definitely seems like an ordering issue. What version of the base operating system are you using? I’m wondering if something changed there that could have caused this.

KIP is great and I’ve used it for a long time. A good dashboard if you want something lightweight that is basically quick to install directly into Signal K and doesn’t require other software.

Sorry Steve, I missed this message.

I’m not sure why it wouldn’t work, but it could be that the older version of SignalK on the iKommunicate isn’t sending the right data. I am not sure if they have kept up with the newer versions of SignalK - might be worth checking on the versions and with Digital Yachts.

Yeah, i think that’s it. Probably my bad for buying the darn thing when the last firmware was 2018. I just ordered a pican. Seems like a better solution anyway.

So, the pican-m works exactly as it should. Easy peasy. Digital Yachts is basically incommunicado. I’ve emailed and reached out via instagram as an alternative. Silence. I dug out a connection deprecated error so I assume that ikommunicate no longer works with signalk. Firmware was last updated in 2018 so i guess that’s no surprise. I’m happy that my system works, but annoyed at wasting 300$ on a not viable device. Totally my bad, but you might want to add a note on your ikommunicate review that it seems to no longer be a supported device.

Thanks for the note about the iKommunicate. When did you buy yours? I will definitely add a note to the article.

Bought it direct from http://ikommunicate.com/ in January.

Thanks! I’ve posted a note at the top of the article so others don’t go down this route. 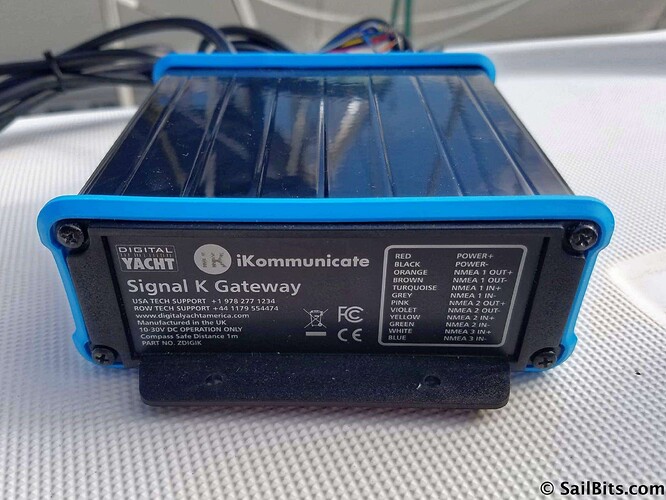 Digital Yachts iKommunicate is a great device to have on a networked boat to help unify everything, as well as provide a web and app portal to all of your instruments and data.

Hopefully Digital Yachts will get back to you - they’re pretty responsive when I’ve communicated with them.

This guide has been super useful – thank you! As I’ve rebuilt my pi 3x now (trying various things out), it’s gotten a lot of use. But, an important note – grafana 8.5 does not currently work on a pi (see Server start failure after 8.5.0 upgrade - #7 by ebouxirot - Installation - Grafana Labs Community Forums) so instead of:
sudo apt-get install -y grafana
you need to do:
sudo apt-get install -y grafana=8.4.7
(it may be fixed by the time anyone reads this, so check the issue in github)

Ah that’s too bad, but at least you know now. Did they offer any sort of refund or anything around that?

They’ve been pleasant about the whole thing and have offered to swap me to a wifi one or ethernet one. I also asked if they’d open source the firmware. Would be an interesting way to not have a product die.